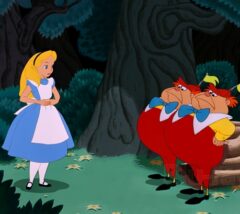 Magic Mirror On The Wall….

In the Disney movie, Snow White and the Seven Dwarfs, the Evil Queen begins each morning by asking…..”Magic mirror on the wall, who’s the fairest one of all?”  The Queen is quite beautiful, at least in appearance, and this mirror always told the truth. So, day after day, the mirror tells the Queen that she is the fairest in the land.  Then one day, to the horror of the queen, the mirror told the Queen that there was someone else in the land more fair and then – more horror follows! — describes her step daughter, Snow White. Snow White, The Queen and the Magic Mirror

The Queen had a couple of choices to make.  Given this truth, she could have taken steps to make herself more “fair” – maybe a new hair color? ….maybe a trip to the facialist?? …maybe deciding to not base her self worth on a spirit in a mirror???   Sadly, the Queen took none of those options but instead decided to kill her rival.

At Aptations, we do not think this is a good option to take when you’re given the truth from your mirror!

In contrast, we have……

Michael Jackson, Man in the Mirror

Michael Jackson sings about the problems he sees in the world – “kids in the streets with not enough to eat”….”there are some with no home, not a nickel to loan” and he wants to make the world a better place.  So he starts with himself, “the man in the mirror…..”  He is asking himself to change his ways to make the world a better place.  The song not only talks about changing conditions for the better, it also points out that the place to begin making those changes is to take personal responsibility.

Clearly, this is a better response than what we saw from Snow White’s stepmother, the Queen.

Both of these famous mirrors are simply a mirror, reflecting back an image.  But how about a different way to look at, or in this case, through a mirror….

Alice Through the Looking Glass

The original title of the book written in 1871 was Through the Looking-Glass, and What Alice Found There.  It was a sequel to Alice’s Adventures in Wonderland.  Alice, Through the Looking Glass, as it is also known, tells the story of young Alice’s trip through the mirror over the fireplace mantel into an alternate world.  When she goes through the mirror, everything is reversed, just like the reflection in a mirror.  Common sense becomes nonsense and logic has no place in this reversed and alternate world.

This is a story about a journey where Alice meets an amazing cast of characters – The Red Queen and the White Queen, Tweedledum and Tweedledee, Humpty-Dumpty, the Lion and Unicorn.  I don’t want to spoil the ending except to tell you that the book ends with Alice pondering the existential question…..

–Christy Winter, Q.O.A.I.S. and Expert in Mirrors, Both Real and Metaphorical